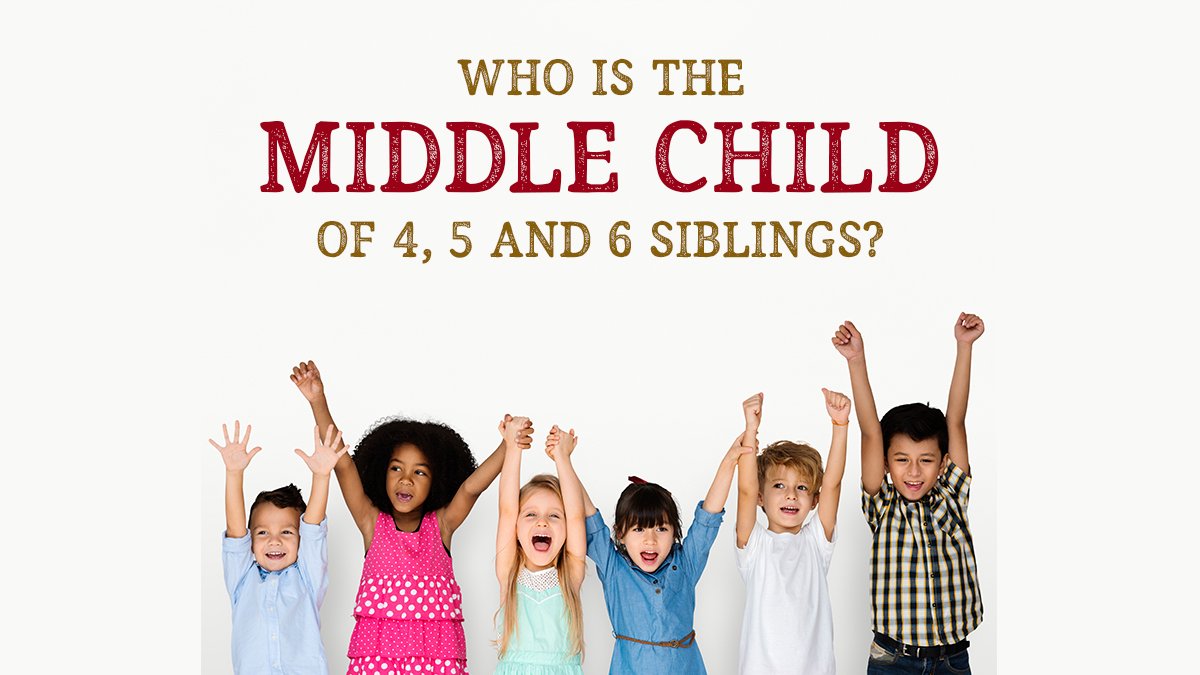 The Middle Child syndrome is a hypothetical theory that middle children are likely to feel a certain way due to their birth order. This position is straightforward when it comes down to a trio of siblings. In such clear-cut scenarios, the middle child is simply the one born after the eldest and before the youngest. However, when it comes down to the abstract notions and effects of Middle Child syndrome, bigger groups of siblings may be affected as well.

True to the laws of the median, Middle Child syndrome may be experienced by a fateful individual even in even-numbered distributions. This means that it is possible for a middle child to emerge from a family of 4, 6, or 8 (and beyond) children.

Thus, what we can infer is that Middle Child Syndrome is pretty much a state of mind. Of course, this state of mind also comes with some criteria – the middle child cannot be the eldest or youngest in a family. This creates a paradox. Additionally, the child should not be entirely estranged from a family. Middle Child Syndrome is a result of the responses to the dynamics within a family – specifically relations with parents and siblings.

With that said, Middle Child Syndrome is not irreversible or predestined. Also, the syndrome is neither good, nor bad, but rather, manifesting through a list of predictable characteristics. For example, middle children may feel left out, without any clear role in the family. Yet, the middle child is also known to be the strongest communicator among siblings, being naturally gifted mediators.

It is important for parents and guardians to note at this point, that middle child syndrome is largely dependent on their parental style. Children brought up in a fairer environment have the opportunity to reach the fullest of their potential. They are also less likely to bear grudges or feuds with their siblings.

One of the major steps in resolving middle child syndrome is to first identify its behavior traits. Regardless of the number of children in a household, there are some key telltale signs that reveal the identity of a self-perceived middle child. However, it is important to note that such traits may be easily confused for a child’s innate personality. In such cases, parents and guardians are advised to exercise discretion in sorting them out.

Middle children may be accustomed to being overlooked and ignored. What began as a struggle for parental attention might be eventually replaced with a carefree, no-qualms attitude. This means that middle children grow up caring little about the expectations of others. They’re used to running their own show and doing their own thing, according to their own rules.

The bad side is that middle children may ignore the advice of others or live an extremely unproductive life. In worst-case scenarios, they may crash and burn due to neglect. It is easy to get lost in the mix when positive influence is constantly being rejected in favor of freedom. This potentially rebellious behavior might lead to social problems and poor communication skills.

Parents can avoid this by intervening during the developmental years of their children. It is important to get each child engaged in family activities, regardless of birth order. Timely compliments are also necessary for keeping children motivated as they progress in their lives.

They’re Both Learners and Mentors

Some middle children may form clear relationship boundaries for themselves. They may assume the role of harsh mentor toward younger siblings while maintaining unquestionable deference for elder ones.

The problem is, this arrangement could be painfully rigid. Middles might choose to ignore the difference between right and wrong. These may be characterized by taking instructions from elder siblings despite their wrongdoings and rejecting (or devaluing) advice from younger ones even when they drive a good point.

Being both learner and a mentor is the best way to learn. However, parents and guardians should ensure that their child does not confuse the purpose of a role with power. It is important to establish a home setting where siblings can mingle and learn from each other despite their seniority. This means pointing out the mistakes of elder children and commending on the efforts of younger ones according to each scenario.

The elder ones are known to possess a strong sense of entitlement – simply for being on Earth for a longer time than their siblings. Younger ones, on the other hand, are likely to be pampered for being clueless, impressionable, and vulnerable to the outside world. This leaves the middle ones – who seems to have the whole weight of the world on their shoulders.

Individuals who face Middle Child Syndrome may feel that they’re obliged to appease everyone and anyone. After all, it did seem to be the Gospel truth to them as children. They might feel that their personal feelings and emotions should take a backseat to those of others. As such, they may become mediators, while sacrificing confidence and self-esteem.

Every child is unique and should never feel inferior to another person (whether it is a sibling or not). Parents should ensure that this precept is ingrained in the minds of their children from a tender age. Each child should be taught to be responsible for their own thoughts, actions, and emotions. While it is wonderful to offer a helping hand or listening ear, such deeds should come with free will. This way, children will become peacekeepers without taking a toll on their self-identity.

They’re Adrift (Lacking A Firm Direction in Their Lives)

Individuals with Middle Child Syndrome may be at a loss later in life. They’re so used to following the directions of elder siblings and appeasing younger ones that they may have neglected the inner voice in their heads. However, it is inevitable that children grow up to seek their own lives. This eventual drifting away may cause a rude awakening for the unprepared middle child.

Such behaviors may have long-term impacts on a person’s success in life. For instance, the middle child might decide to take on a nondescript job despite having an innate passion for the arts.

There is much to be gained from fellowships, such as learning from the expertise of industry leaders and mentors. However, it is necessary for individuals to exhibit control and direction in other aspects of their lives. For example, when it comes down to identifying talent, one never knows until they try.

A lack of direction may also cause individuals to be risk-averse. This may lead to a lifelong pursuit of safe and stable situations while passing up on various opportunities in life.

Parents and guardians can avoid this by empowering their children with the freedom to plan, think, and act for themselves (under the right circumstances). This should be fair across the board, regardless of a child’s birth order. One way to achieve this is to have children take turns in deciding the family’s weekend activities.

Identifying the Middle Child in the Family

The middle child is perhaps, best described as an individual who feels a sense of belonging to the middle ground in the hierarchy of siblings, an individual who may exhibit most of the character traits we have identified. The middle child might bear the identity in secret, and it is ultimately up to parents and guardians to recognize them through key behavioral traits over the years.

The Middle Child Syndrome was established by psychologist Alfred Adler in the late 18th century. Adler believed that birth order could lead to long-term implications such as the formation of an inferiority complex.

However, history has proven just how wrong some of his theories are. Middle children have gone on to shape the face of the Earth, while their siblings remained unmemorable. Martin Luther King Jr, Warren Buffet, Charles Darwin, and Martha Stewart, are just some of the many middle children who refused to be bogged down by birth order. Couple that with the fact that more than half of former US presidents were middle children.

Middle Child Syndrome may hold some truth but ultimately, the choice to succeed lies on the shoulders of the individual. Katrin Schumann, co-author of The Secret Power of Middle Children, believes that many individuals eventually make the best out of their position. Schumann shares, “While middles do tend to feel overlooked and undervalued, they often grow out of this as they mature and the dynamics within the family shift.”

Regardless of who the middle child is within a family, it is crucial for the individual to realize that they have the keys to unlock any shackle to birth order, to enjoy a lifelong journey of success, happiness, and achievement.