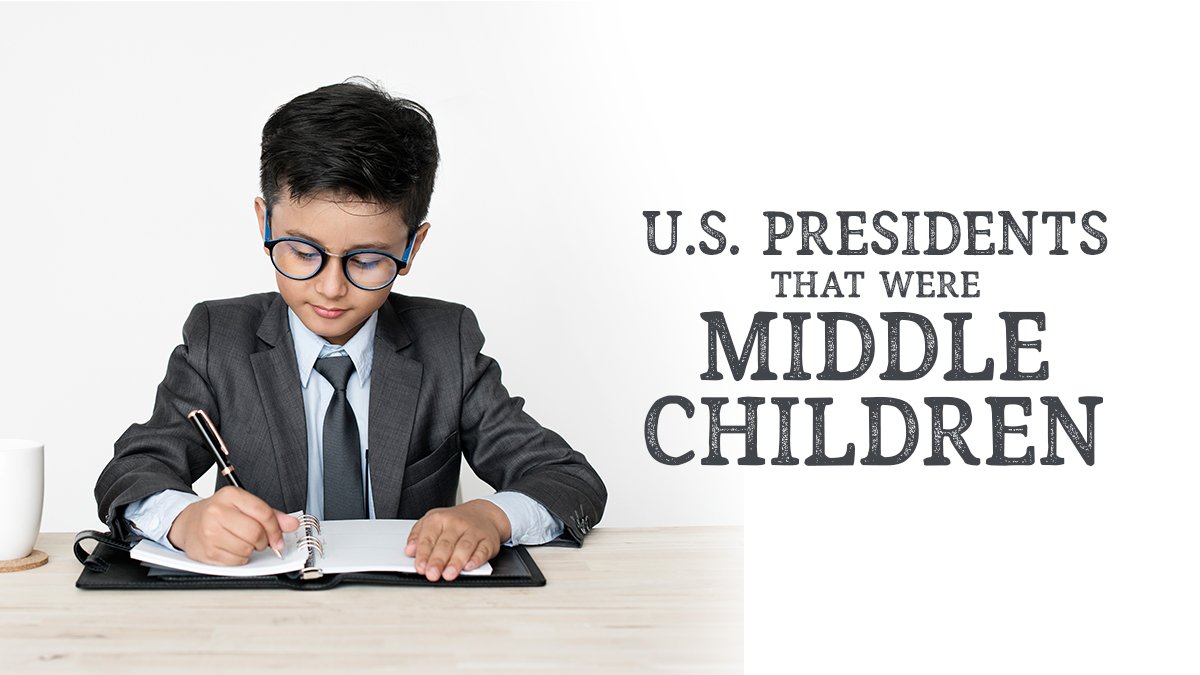 U.S. Presidents that Were Middle Children

It is a common misconception that middle children tend to feel left out and insecure. The mistruth goes on with the assumption that middles are always seeking to extend the olive branch as if it is their life’s calling to fit in and curry the favor of others. Some middle children have gone on to debunk this belief – by becoming leaders. In fact, they excelled in leadership that they went on to become heads of state – U.S. Presidents.

A whopping 52% of former presidents were middle children. The records do not lie. These esteemed figures include JFK, Eisenhower, and even George Washington. So what is it that made these men tick? It is likely due to a combination of environmental and socio-political factors in their time.

Most people would expect the firstborn to assume the role of a leader. After all, they are expected to set precedence for their younger siblings – a habit that morphs into a lifelong virtue. Yet firstborn American presidents only make up the second-largest group. Only 7 former presidents were babies of the house – perhaps most babies are too pampered to rev their engines and there is some truth to stereotypes after all.

Perhaps one of the most iconic presidents to have ever lived. He was a champion of abolition and proponent of equality. A reminder of his tireless conviction remains in the Lincoln Memorial Hall, with his massive likeness sitting proudly as he gazes toward the soil he held dear in life.

Lincoln was a middle child who had an elder sister, Sarah, and younger brother, Thomas. Unfortunately, Thomas passed on at a tender age of three from a childhood illness. Lincoln and his sister grew up like two peas in a pod. Although the surviving siblings bore an age gap of barely two years, Sarah took on the role of matriarch in the Lincoln home when their mother passed away from a brief sickness.

Sarah eventually got married but died tragically from childbirth at the age of 21. Lincoln’s father got remarried, to a woman who had children of her own. However, honest Abe never shared an intimate bond with his step-siblings.

The 16th POTUS was believed to have been influenced by the grace, wit, and intellect of his beloved sister. In fact, a portion of his staunch beliefs may have been shaped by his sister – who lived through his words and actions.

President John F. Kennedy came from a huge family of 8 siblings. He was the second child in the Kennedy clan.  The Kennedy family was heavily involved in politics and JFK was perhaps the most prominent member. Patriarch Joseph P. Kennedy Sr. ensured that his children had equal opportunities to thrive on the national stage and beyond. This eventually led to siblings Robert, Jean, and Edward being involved in politics.

Unfortunately, JFK’s term as president was prematurely ended when he was assassinated in 1963. There was so much more to be done for the middle child who had set up the Peace Corps, avoided recession, and negotiated a truce with the Soviets.

President Eisenhower was a prime example of a luminary who exemplified one idealized trait of middle children – peacekeeping. Eisenhower grew up with three brothers: Milton, Edgar, and Earl. Although the president possessed a decorous military background (being a five-star general during World War 2 no less), he prioritized peace and community above all else.

Eisenhower’s family lived in a traditional cottage in Kansas where the former president and two of his brothers squeezed in a room not much larger than a broom closet. The eldest brother, Arthur, though, had a room all to himself at the end of the hall. The Eisenhower boys grew up united within a religious Presbyterian setting with strong values, ultimately soaring in their respective careers.

The diplomatic president’s greatest accomplishments include negotiating the end of the Korean War and passing the bill that saw the construction of the interstate highway, which kept  Americans connected closer than ever.

There is too much to say about George Washington, the POTUS who started it all. But few may realize that he was in fact, a middle child in a huge family. Washington had two sisters, three brothers, three half-brothers, and one half-sister. Although the leader is known to have been the first in war, first and first in the hearts of countrymen, he was also known to have idolized his elder brother, Lawrence.

Lawrence introduced George Washington to the upper echelons of the Virginia gentry through his social connections. This helped George open doors to new possibilities that eventually saw his rise to the leadership role he is fondly remembered for today. Other siblings, such as sister Betty Washington, also played key roles, such as contributing her personal wealth toward funding the American Revolution.

George Washington may be a founding father of a proud nation, but his success was palpably shaped by siblings who stood by him during the most critical times in his life.

The Unlimited Potential of Middle Children

And the list of presidential middle children continues with Thomas Jefferson, Zachary Taylor, Woodrow Wilson, James Monroe, Herbert Hoover, and even incumbent President Trump. This goes to show that middle children have the power to become leaders if they’re provided with the right influence and opportunities.

The next time you feel Middle Child Syndrome pulling you down, look around you and remember the amazing middles who made it all possible.