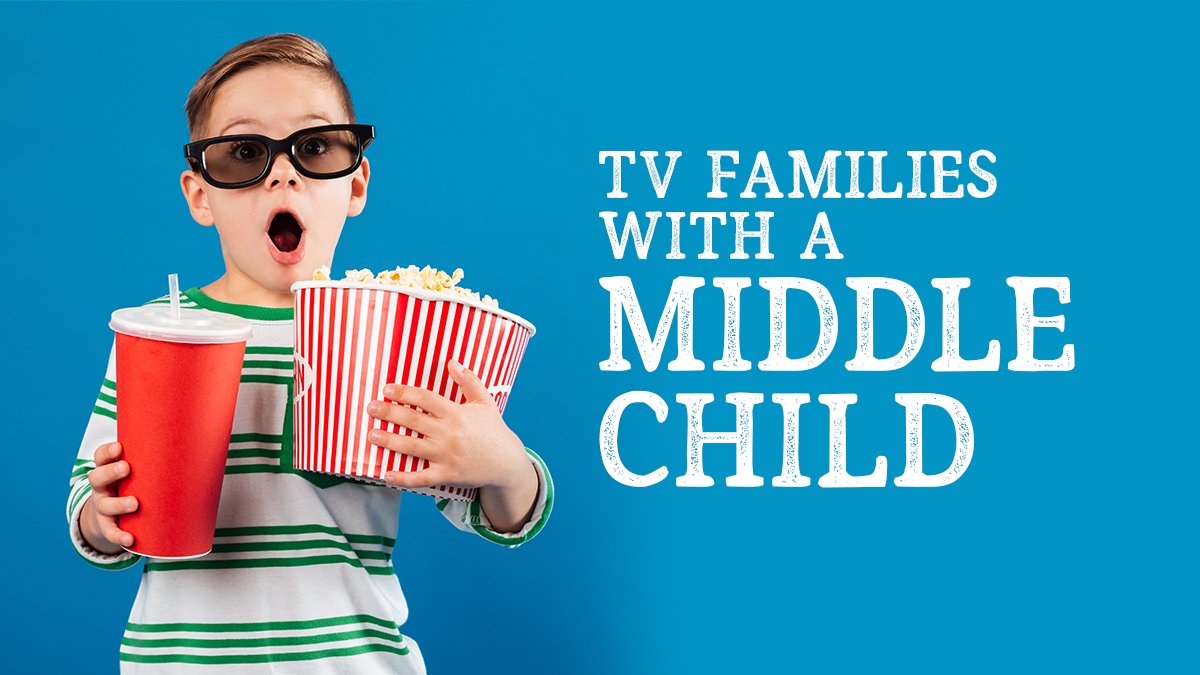 TV families with a Middle Child

Among the all time favorites coming in at #9 is Jan Brady of The Brady Bunch. I grew up watching the Brady Bunch and like many, I remember the drama that centered around Jan and Marcia. This family is unique in that there are actually two middle children from two family backgrounds. The Brady parents, Mike and Carol, form the Brady Bunch after they marry and bring her ‘three lovely girls” together with his “three men who were all alone.” In the opening credits we are introduced to the family and how they came together. The writers clearly set the audience up for some sibling rivalry by introducing the children in birth order and the two middle children stuck in the right and left boxes of the square.

During the five seasons we meet two middle children who have nothing in common except that their parents are married and they live under the same roof. The relationships that they have with their older siblings is as predictable as one would expect. Still, these two middlers do not always fit what we like to call the middle child mold. Peter and Jan typically get along and sometimes work together to help the other accomplish something with regards to the family or a family member.

Jan Brady embody’s most of what we attribute to a middle child. Not only is there the rivalry with older sister Marcia, there is also the aspect of living under Marcia’s shadow. Jan has a perpetual struggle to break free from Marcia’s shadow, the feeling that she will just never be good enough, or to be accepted for who she is. Jan always felt looked over, and in a family with two middle children she felt at the bottom of the heap. This carried over into adulthood as seen in the 90’s Brady Reunion movie.

It almost sounds like a rallying cry of some sort but in reality it is a plea from Jan for someone to just recognize her. Her complaint is that “every time I turn around Marica is getting another award.” From blue ribbons to trophies, and every other award, Marcia is the perfect older sister in a sibling rivalry. Jan did horrible things to Marcia, like ruin Marcia’s dress or worse spread rumors so she wouldn’t have friends or not get a date, so that Marcia will be like Jan, ‘left out.’ Jan believes that she will never get out from under the weight of Marcia. Even after mom Carol, and dad Mike tell Jan to apologize for the cruel things she has done to Marcia, like destroying those awards, the feud continues. Unfortunately for Jan her misconceptions go beyond the family.

Just Trying To Be Noticed

Like many middle children Jan Brady will pull stunts and resort to ridiculous antics just to be noticed. We know that in the family life, middle children have many such issues, but sometimes this goes on at school, and with friends. Once Jan donned a 70’s style black afro wig just to be noticed, since she perceived that no one at school noticed her because of her ‘golden’ hair. Perhaps it is another effort to break from the Brady sister look.

Unfortunately for Jan her misconceptions go beyond the family, and she struggled with other relationships, like having no boyfriend. Once Jan invented a boyfriend just to protect her reputation. Jan may exhibit many typical middle child characteristics, yet she is still one of two middle children in a family with two sets of kids, from different parents.

The other Brady middle child is Peter Brady who is the middle son of Mike Brady and his other two sons Greg the oldest, and Bobby the youngest. Peter is not a classic middle child, yet he has the sibling rivalry and he struggles with his personality, thinking that he has no personality. This come out in the episode “The Personality Kid” and later we find Peter imitating Humphrey Bogart saying “Pork Chops and Applesauce.” The Brady parents tell him to just be Peter, yet he continues to struggle with his personality and his place in the family.

Like Jan, Peter had his moments living in the shadow of his popular high school jock brother. The girls like Greg and he was a stud on and off of the field excelling at all he did. Greg was extremely popular, leaving Peter to struggle to measure up to his big brother. Yet, with all of his struggles Peter always found helping the others, especially the younger siblings.

We cannot assume that everything was due to being the middle child since they became part of a mixed family with different biological parents, going from three kids of one gender to six kids of mixed genders. The new family life had its twists and turns. While we like to typecast our favorite middle child from TV we must consider all of the factors that make them who they are. They are not just a product of a writer making them the middle child. Often their character is developed over many seasons.

There are some very popular TV shows with middle children that play a variety of roles. Some are about the middle child, like “Malcolm in the Middle”. Malcolm is a genius in a dysfunctional family, where his brothers often bully him. Malcolm is one of those kids that just seems like he was born into the wrong family. His parents don’t really try to understand him. How is a genius middle child supposed to survive in this environment?

Middle children are affected by their environments. Middle children troubles go beyond the family and for Malcolm, he has plenty of trouble at school where he has a hard time because of his status as a genius. Malcolm is a great example of a middle child overcoming obstacles at home and elsewhere. If there was ever a misunderstood middle child it was Malcolm. It’s a wonder that he survived. No one really understood Malcolm.

Others tend to focus on other children, leaving the middle child to be a less important character, like “My Three Sons”, where the focus is on the oldest son Mike, initially and then in a twist he leaves the show, as he marries and moves away, leaving Robbie to be the ‘oldest’. This scenario sometimes plays out in families with middle children, where the middle child is in the role of oldest. In Robbie’s case he does a great job of adjusting.

If my middle child had a character that she felts she identified with in TV it would be Lady Edith Crawley of Downton Abbey. Lady Edith is the aristocratic middle child who stands to inherit nothing except older sister Mary’s leftovers, and can’t seem to fit in. Everyone adores the youngest daughter Sybil. After Sybil’s death in childbirth Mary and Edith do get closer, but eventually Edith flees for London where she assumes a career as a journalist. She does so many things that are not what is expected for the daughter of an Earl in the early 1900’s. Edith’s story seems tragic, sad, and hopeless but ,in the end she marries a Marquis and by title, she outranks all of her family members. Never count the middle child out!

Whether in reality or in TV world there are no clear guidelines as to what a middle child would look or act like. But, we see enough that there will normally be rivalries between siblings and often personality or identity struggles. Perhaps “Leave It To Beaver would have been an entirely different show if the “Beav” had been the middle child. Yet, there are so many TV families with middle children I am sure that you can find one similar to your family situation. Study the lives of some of the many TV families with middle children and learn how they handled similar situations you may encounter. Just like the TV families your situation is unique, and it’s yours. Don’t try to mimic those responses but, use them as a guide.