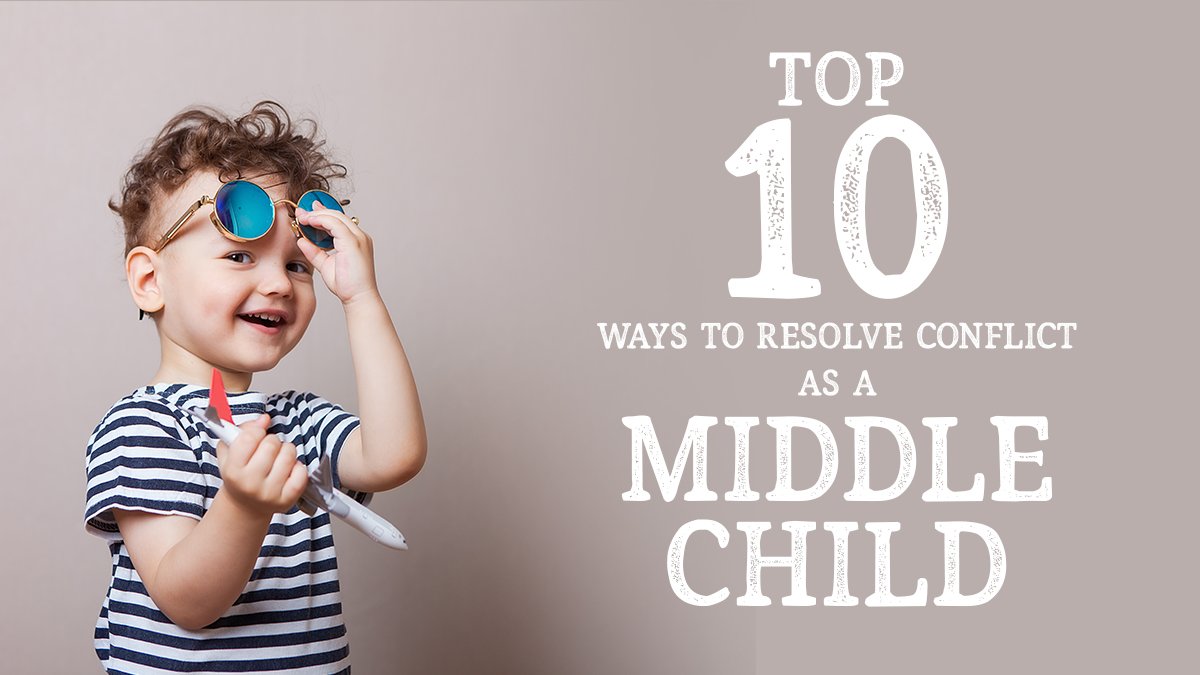 Top 10 Ways to Resolve Conflict as a Middle Child

Resolving conflict is always good and healthy and promotes character and strengthens relationships. The middle child is often a natural peacemaker and thus, can be well adapted at resolving conflict. This doesn’t happen overnight, but is slowly developed over time as situations arise that cause them to learn how to react and respond. Conflict resolution has become an industry where there are professionals trained just to go into situations and resolve conflicts. While the middle child is a natural peacemaker, there are still certain ways that they can resolve conflict.

Having experienced the following ways that a middle child can resolve conflict with my daughter Lyn, I compiled this top ten list based on my experiences. I believe that they will be useful in any middle child’s situation, and family. Resolving conflict requires that both parties are active participants in the process. Every situation is different and the middle child should analyze all of the facts before proceeding. Yet, a simple conversation can grow into a heated shouting match over a misconceived word.

The key is to always pause and take a deep breath and ask, “what happened to get me to this point?” It could have been from the beginning of the day or carried over from the previous or even an ongoing conflict. Sooner or later you, the middle child, will have to face up to the fact that there is a problem and ask, “what can I do to help resolve this?”

If you are a parent you know how a discussion starts out peacefully and soon goes into full-blown screaming, shouting, and anything but peaceful. So many times my Lizzie tried to talk to my middle daughter Lyn and Lyn would perceive what she was saying as one thing. Soon she was stomping off and not letting Lizzie explain what she meant. When it happened to her Lyn realized that people misinterpret things so we have to choose our words wisely. Part of a peaceful discussion is maintaining peace by asking what is meant if something is unclear. Don’t sit there and assume one thing when it is may be false. Even if what you interpreted was bad then ask yourself if there is any truth..

2. Be Proactive And Say I’m Sorry

Don’t wait for the older sister or parent to come to you, but be proactive and go to them and say I am sorry if I did anything wrong. You may not have done anything, or may not be aware of anything that you did that caused any harm. Nevertheless, an apology even when you are innocent does a lot further in resolving conflict. I have heard my children apologize when they were not the one at fault, and the other sibling respond with “don’t let it happen again.” In that situation the less said is better because it will only heat things back up. Perhaps the offended party will realize their mistake as I have had to when Lyn apologize for something I thought she had done when in fact I found out it was her sister. I had to apologize to her and it strengthened our relationship.

The middle child may feel the pressure to quit and give up. While this may seem like the easy route it does nothing to resolve the conflict. My daughter Lyn would go to her room, leaving things unresolved. By continuing to run away she was avoiding immediate conflict but postponed a permanent resolution. Almost daily Lizzie and Lyn would get into an argument and Lyn would eventually go to her room. I told her that she needed to stay and to be heard and not run away. That led to Lizzie respecting her, and their relationship grew stronger. By not running away from the conflict Lyn grew stronger and gained the respect of every family member.

5. Look At Both Sides Of The Problem

In any conflict there are two sides and both are usually right or at least they think that they are. Take my daughters sitting in their homeschool classroom and Lizzie makes a comment to her mother and Lyn walks in and believes that she was talking about her. Actually, Lizzie was carrying on a conversation about a student at the Taekwando studio where Lyn trained. Nevertheless, Lyn made accusations and claims about Lizzie. When the dust settled and all facts were weighed, Lyn realized she should have asked if she was talking about her. Listening requires us to pay close attention.A coin has two sides and the middle child needs to see the other person’s side and make sure that theirs is presented as well.

6. Don’t Withdraw Or Isolate – Face IT

Facing conflict is not easy no matter who you are, and when you think everyone in your family is your enemy it makes you want to ‘run away.’ If you can’t run away as Lyn wanted to you stay hidden in your room, with the door closed and a trash can in front of the door to try to prevent any contact with any family members. Eventually Lyn always had to face the problem and realized that hiding or isolation was not solving anything. Always face it, talk about it and if you have to, ‘cry’. But deal with it.

Walking away is not the same as withdrawing. It simply is an opportunity to deal with the conflict by taking a deep breath and walking away. It may seem like walking away is avoiding conflict but this is also a method of conflict resolution. When people sit down to talk and the discussion goes awry, nothing accomplished. it may be time to ‘take a chill pill’ as the saying goes. I have seen all of my family members walk away from an argument and return with a better strategy. Usually Lyn walked away because the yelling just got to her. She always returned with tears and an eager spirit to finish what had been begun.

I have written that establishing healthy boundaries is a positive aspect of avoiding conflict. However, it can also be a way to resolve long-term conflict. When there is conflict between the middle child and the parents or siblings, it is often only temporarily resolved. Lizzie and Suzie created boundaries with regards to middle sister Lyn. It seems that Lyn learned from this and set up boundaries herself. These boundaries must be healthy and not walls that block out others entirely. Learning to answer politely when the door was knocked on verses ignoring the knock or yelling to the door for the person to go away was not healthy. Acknowledging that Lyn’s privacy and boundaries by politely knocking lets her know that we respect her and begins the ensuing conversation peacefully rather than in turmoil.

I mentioned previously that saying sorry even when you were not the offender is a way to resolve conflict. For the middle child, though, the power of forgiving the other person is a greater tool in resolving conflict. Not everything is the fault of the middle child and so when the sibling or parent approach to restore relationship by asking forgiveness it is up to the middler to forgive or not. Choosing to forgive releases you from future pain and releases the other person from feeling guilty. I remember Lizzie and Susan coming to Lyn when they realized that they were at fault. they had both erroneously assumed something about Lyn and made a decision which infuriated Lyn. Lyn was very upset, angry, and really wanted nothing to do with her siblings. But after a few hours in silence and reflection Lyn knew that it was the right thing to do and forgave the sisters and restored the relationship.

10. Let Your Voice Be Heard

We all have a voice and we all want and need to be heard. As the middle child you need to be firm and speak up and make sure that others you may be in conflict with really listen to what you have to say. Often, when Lyn would come to discuss a problem she would always end up saying that we didn’t listen to her or ignored her. Whenever Lyn came in to discuss a problem there was always an interruption and she would leave without being heard. The challenge is to press in and do whatever it takes to make sure your voice is heard and not ignored. Whether you are a parent, sibling or middle child we need to listen to the other parties. I must caution everyone to listen and let each person speak and have their say.

The above list is not exhaustive and likewise many of these items listed may overlap. Ultimately I challenge family members to listen to each other, set boundaries, and always face the problems head on. There is a time to walk away and contemplate but always be ready to say “I am sorry” and also to forgive. While resolving conflict is the goal, the process is equally important and I caution you to not rush through it. Remember these are guides and your situation may dictate that you have to be creative.