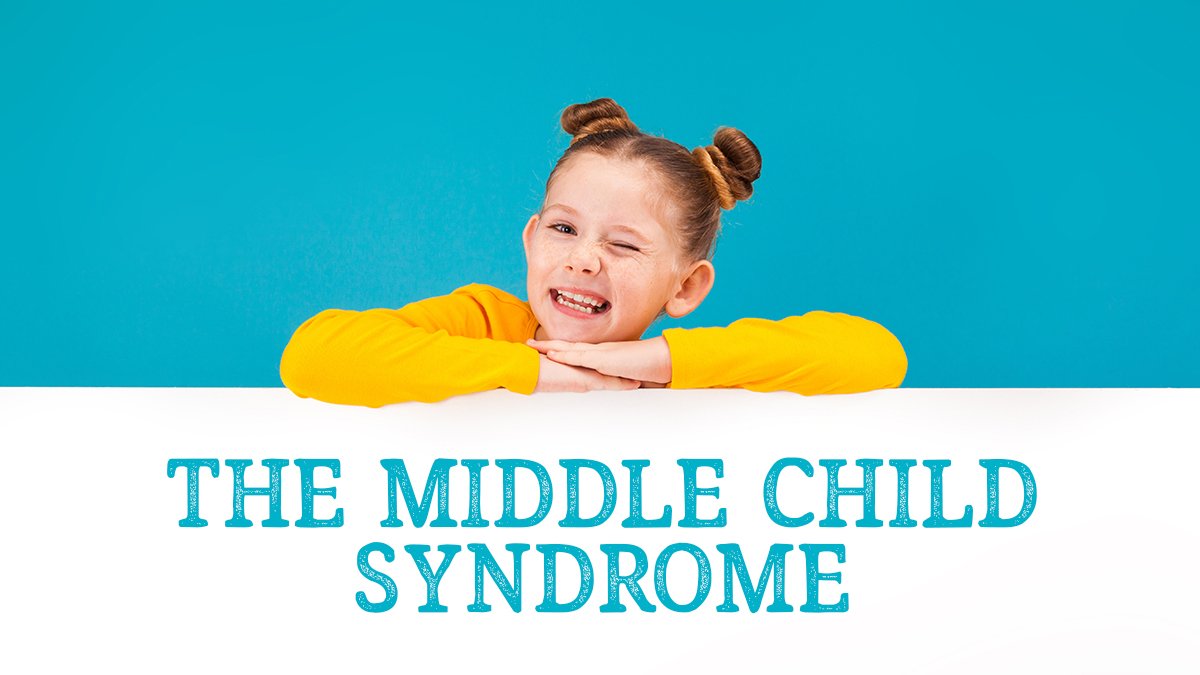 My wife and I had always planned on having two children, and we certainly enjoyed our first two daughters and loved them with all of our hearts. Yet, the second child just seemed to do things that made no sense. Putting things up her nose for attention, and making bigger mess than any child I knew. I kept asking why is she so much different? I remember when my wife told me she was pregnant with our third child, and someone remarked, ‘that makes sense, the problem is that Lyn is not a baby child but a middle child!”

I had heard about this thing called the ‘middle child syndrome’ but I didn’t put much credence into such nonsense, or at least that was my posture. Soon, after Susan was born and Lyn tried to pull her arm out like she was a doll I began to wander, “Maybe there is something to this ‘Middle Child Syndrome.’ After all, she has really become quite annoying, and hitting on her older sister all of the time. She was trying to tell us something. It was hey, don’t forget about me.

So why is a middle child different? Let’s define the three orders. First, the oldest child is the privileged child and is characterized as more authoritarian and feels all powerful due to parental expectations placed on them by the parents. The youngest or baby is often spoiled to the point that they feel that they can’t rise up higher than the other siblings. Finally, the middle child just doesn’t know where to fit in, yet is even tempered. They feel sandwiched in between the others. As my put it the middle child is like the cream in he oreo. A feeling of being excluded often accompanies the middle child. But, this can be an advantage.

I watched my children grow and Lyn always had to be different. Lizzie just seemed to jump right in and take control, whereas Susan tried to followed her. Lyn , however didn’t know what to do. One day she wanted to be the leader and so she fought with Lizzie. The next day she wanted to follow or be spoiled so she fought with Susan. As they grew older these would change but Lyn always had to be different.

Going Through A Phase

As Lyn grew older she started wanting things that she saw the other two have. She wanted a pet, but she didn’t want a dog or frankly any normal pet. It had to be a hermit crab, or a snake or beta fish. Finally I let her have a dog like Lizzie, but another problem developed. Now Susan wants a pet and she felt left behind. The competition continued and when Susan got her gerbil guess who wanted a small mammal? Yes, Lyn!! Rivalries, different personalities, and temperaments all were on display. Finding who they are is part of the journey for a middle child.

The rivalries are still there as grown adults, but they have learned about each other, and Lyn has learned more about herself. Getting here wasn’t always easy, and there were the tool belts, and tools, and the years of Taekwondo, and then she found her niche in reading classic books. They all enjoyed reading, but books were Lyn’s best friend and helped her escape and ultimately find something that the others didn’t share. They all read but Lyn had her own unique genres and they were hers.

Some of what happens in a middle child’s personality is influenced by factors outside of the home. Being bullied at school and falling behind in school and learning that she had dyslexia made matters worse. Understanding the middle child can be a challenge but it can easily be overcome by not trying to be their friend but be a parent that loves them and recognizes that they are unique, and special.

They just don’t see their uniqueness at home, and thus it needs to be reinforced. Psychology Today says that middle children have to work harder to overcome people’s expectations of them, and they may have lower self-esteem than the other siblings. They are also trusting and dislike conflict. Yet, they make very good employees due to being more even-tempered and having had to overcome more obstacles are better prepared.

Fitting In And Not Fitting In

To fit in or not, that is the question that a middle child may ask. As the children grow older and develop friendships outside of the home the relationships between siblings changes. The middle child finds that they have their own personality and fitting in is not all it’s cracked up to be. In my case Lyn’s struggle to be Lyn and not the others forced her to fit in by not fitting in. In other words, she best fit in by being the middle child. I often affirmed her unique style and methods and let her know that was what made her special. I remember once I told her that her primary jon in this family and and anywhere was to be the best middle child that she could be.

One challenge is as a middle child grows into adulthood that due to all of the negatives, like favoritism, they can develop codependency. (Healthline Parenthood Aug. 2019) They may take on the peacemaker role or worse hide in a shell, withdrawing. This can result from depending too much on a sibling or even a parent. I can see in my situation how this developed as I was the parent that my middler came to to resolve conflict instead of working it out with her siblings. Also, middlers handle situations differently and can be a result of just not really knowing how to respond. If she does this she’s like the oldest and the other way may be like the baby. What do I do? Ultimately my middler was forced to make decisions without the influence of anyone, especially her siblings.

What Does Science Say?

The American Psychology Association does not recognize the birth order theory and doesn’t see it as a true psychological issue. However there have been exhaustive studies, and some good information. Some characteristics seen in middlers as they grow is maladaptive perfectionism, and less family oriented than other siblings. Both of these have become real attributes in my own middle child. There have been studies both positive and negative and there is no real hard evidence to say whether middle child syndrome is real or not. However, it is my experience that it is real and while there existed certain personality traits, the rivalries, competitiveness, and trying to fit in were all real and can sometimes still be evident.

What Would I Advise?

Being patient with a middle child should seem obvious but it is a necessity with all of our children. Patience requires a lot of improvement on the parents’ part to learn ways of dealing with situations as they arise. The middle child is no different than the other children when it comes to parental requirements. Helping them understand their uniqueness and waiting to see growth, and acceptance of their role as ‘the middle child’ takes time for us and them. Watch and wait to see them grow into maturity. Many middle children have gone on to be successful like Abraham Lincoln ad Dr. Martin Luther King, Jr.

It goes without saying the we as parents must be persistent not only in our true expectations and affirming the middle child, but also in believing that they will overcome any obstacles. .Being persistent does not mean that we always have to take a firm rigid . It also means that we allow them to make their own choices in friends, career, and hobbies, as that is part of their becoming their unique individual self.

Pressing through to see all of our children be and do their best is every parents desire. This requires a lot of patience and persistence and knowing who our children are and believing in them. Making sure that they know it will allow both parent and child to be successful. Demonstrating love in every facet of life requires a lot of perseverance, especially when the middle child performs unusual antics just for attention. Expect the best always and when it doesn’t happen use those failures as points to grow from.

I admonish you not to rely too heavily on the birth order model but use it as a guide to understand how each child is different and how they are unique and raising a family with middle children should be a joy and pleasure and a blessing from heaven as it has been in my case.