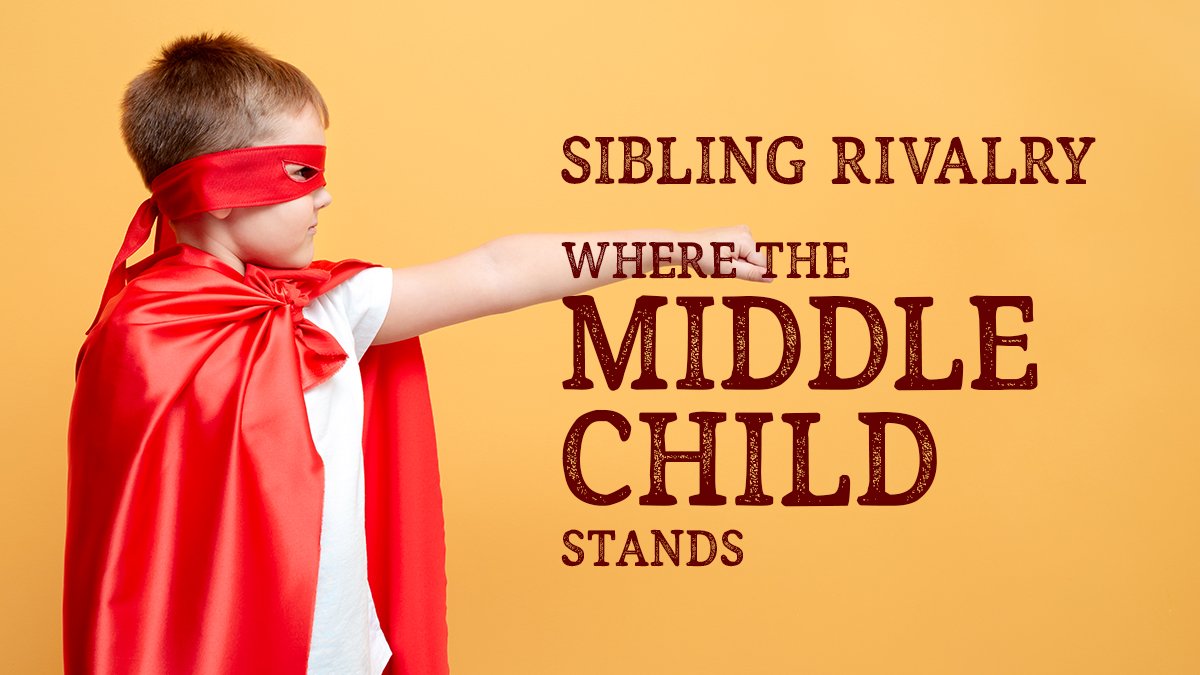 In my experience I have seen these rivalries instigated by all three children. Most of the rivalry involves the middle child and the oldest. It is interesting that as time has passed, my middle daughter has learned to play the role of peacemaker when it comes to my oldest and youngest daughters. How in the world did a middle child who has spent much of her life involved in some sort of competition with her two sisters, step into the role of peacemaker? Going from the one who was always looking for her identity or trying to fit in, she found a place where she can bring resolution to some family conflicts.

There is always tension in families and especially with the oldest and middle child. Both children are seeking to be heard and recognized and respected, and take their place. The older sibling often does things that the middle child know that they were there first, but they really want to just have fun and enjoy life. When my middle child was born my oldest, Lizzie didn’t know what to make of he new sister. She was always a good, loving sister, and often helped us feed her and do helpful things. As Lyn grew older Lizzie craved attention and didn’t want Lyn to play with her things. Lyn played differently and seemed to not take care of the toys as Lizzie had. Lizzie established who was in charge, or at least in her mind that was what she thought she needed to do.

Lyn and Lizzie were two totally different people to begin with. Lizzie always played by herself really well, and she reached a point where she didn’t want Lyn around because she didn’t play the way she wanted. Later Lizzie would holler out because Lyn had bitten her or hit her. Often it was really over nothing. When baby sister Susan came along Lyn tried to pull her arm out and Lizzie felt like ‘oh no, here we go again.’ Lizzie had already demonstrated that she didn’t want to play with Lyn and now here comes another one. Lyn was just different and needed someone to help her understand. Lizzie felt like she had to defend her toys, her play space, and he role as big sister. After all she was here first. She had to take a stand against these new kids disrupting her life.

Being different is what we are supposed to encourage our children to do. It is those differences that often result in an older sibling interpreting things as the need to defend themself. Many times as they grew up Lizzie was able to make new friends with no trouble. Lyn would often have a few friends but for some reason she felt like she needed her big sister’s friends. So competition evolved as to who could be so and so’s friend or can Lyn be friends with Lizzie’s friends too? The worst part was that Lyn’s friends wanted to be Lizzie’s friends and so the jealousy mounted. They fought and said horrible things about each other and doors slammed and occasionally they didn’t speak for a day or two, all because one of Lyn’s friends called Lizzi on the phone.

It was not always about friends. Like Jan Brady and her sister Marcia on the Brady Bunch, Lyn seemed to have this complex that Lizzie can’t do anything wrong. She gets all of the good friends, people ask her to do stuff, and she is good at this or that. Lyn believed that Lizzie never got into trouble or did anything wrong. Lyn also had a problem of noticing everything that was different or what was wrong with what we did for her. Soon it was as if Lyn kept a running tally of how many times we, the parents, corrected the other two or how often we said nice things to the other two.

I was constantly reminded of what Lizzie or Susan got, or what Lyn didn’t get that the others got. There was a point that the rivalry affected our relationship with our middle child. Now, Lyn perceived that not only were the other two sisters better, but that we had made sure it was that way. She believed that we didn’t care or love her and so a cycle began where this resulted in Lyn making up stuff about the others and getting them into trouble. Lyn’s role as the middle child and her place in the family was not clearly defined in her mind for many years. In attempt to do better than her siblings she tried different things like Taekwando, working with hand tools, and then wanting a pet just like Lizzie.

Lyn’s love for reading began because Susan suggested that she check out a book. She had a hard time making personal decisions, and often would just do what the others did. Many of Lyn’s habits developed as a result of thinking ‘well Lizzie does it so I will do it too.’ When Lizzie got mad and fussed at her she would do something that Susan was doing. Back and forth it went, and finally she spent a season where she just stayed in her room, away from everyone. Depression, hurt and just not knowing who she was or where her place was was the result of the rivalries and trying to be Lizzie or Susan, or worse measure up to what she thought her parents wanted.

Sharing the room with the youngest sister probably provoked Lyn to be like the older sister. Even though the middle and youngest fought it was mostly from being roommates than pure rivalry. Lyn sometimes complained that Susan got all of the attention and we favored her because she was small and the baby. Still, Lyn, stood in the middle with her mind pulling her towards being number one or just quitting.

From the parents perspective we always tried to treat each one fairly and encourage them to not fight and get along. As simple as it sounds they did get along. I always tried to spend equal amounts of time with all of them, but Lyn felt that the other two received more of my time even though she was the only one I took on a road trip camping. She was the only one that helped me do major home repairs. The others perhaps, had a valid reason to gripe .

Knowing that Lyn felt that she didn’t fit in, or that she wished she hadn’t been born was the worse feeling. These are the areas where we are challenged to demonstrate the worth and value of every child. Lyn had high hopes to get into a prestigious college somewhere away from her family. It didn’t matter where just anywhere, because for her this family would be better off without her. Circumstances dictated that she would not go away, and she was instrumental in helping with her grandmother in her illness. As we worked on our relationship she began to see that we cared for her and that she didn’t have to be like the other two.

Lyn has developed her own thoughts and ideas and her own way of doing things. She developed good habits as a result of the dark days that enabled her to grow and find herself, and who she was created to be. Parents tend to show favoritism even though we don’t intend to. Lizzie was here first and we did spend three years with her before Lyn came. Lyn’s differences sometimes just made me mad, and perhaps I wandered why she couldn’t be like Lizzie? I loved her and helped her to grow into who she has become.

There were those moments where Lyn stirred the pot and caused the other sisters to get into a heated argument, usually over things she said that were not true. Again, this came from a place of being hurt and wanting them to feel hurt. Yet, it was these instances of instigator that eventually resulted in Lyn becoming a peacemaker. The role of peacemaker was not limited to the siblings, but also to the parents as well. The parents have a role in these rivalries and they can help or hinder them. For my middle child she watched and learned through the years and was able to turn all of the negativity into something useful..

As tutordoctor.com puts it, “middle children often feel that life is unfair and this often fosters sibling rivalry.” In my situation, for the middle child life was and still can be unfair. Nevertheless, she was able to take those moments and turn it around to something positive helping the situation and not continuing to be the problem. President Harry Truman used to say, “the buck stops here”. So, for the middle child, I say “take a stand and make the rivalry stop with you.” The middle child will always stand in the middle, and will learn to get back up when sibling rivalry knocks them down.