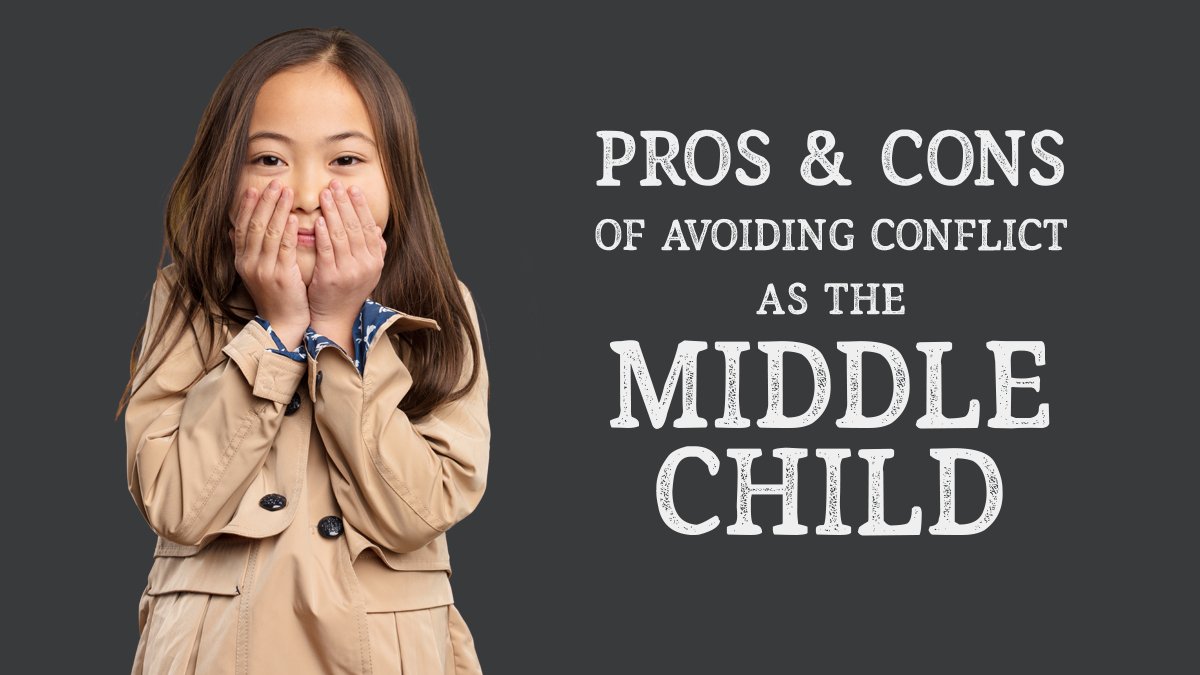 Pros and Cons of Avoiding Conflict as The Middle Child

Every family member has its roles and functions within the family. The middle child role is unique and one that no one else can fill. However, parents and siblings present many opportunities for conflict. Whether it is from competition, false perceptions, misunderstandings, or whatever the cause we know that conflict can lead to multiple problems, and if allowed to run unchecked, can destroy relationships and the family as a whole.

Avoiding conflict is the ultimate goal in any relationship, but often it is unavoidable. There are good and bad reasons for avoiding conflict and with the middle child it is a great attribute they it seems they are born with. According to Sternbergh in The Cut, middle children are natural born negotiators. I have previously written that my own middle child developed into quite a peacemaker. Often we overlook the middle child’s natural abilities as we often tend to overlook everything about them. Yet, it is with difficulty that anyone, let alone a middle child, can avoid conflict.

There are both pros and cons as to avoiding conflict from the perspective of the middle child. Older and younger siblings often strive to avoid conflict as do parents. By the same token, sometimes conflict may seem unavoidable and thus, the burden is on the middle child to avoid conflict. Will the middle child seek to be a builder of character, and relationships, work toward a lasting solution and establish healthy boundaries? Or will they avoid conflict and allow problems to fester, become the family punching bag, be seen as weak, or just go sit in their room and be isolated?

Often Middle children don’t see the need to build a better relationship with their siblings or even their parents. They can see themselves as overlooked and the victim that everybody wants to step on “so why would I want to have a good working relationship”, they may ask? My middle daughter felt a battle on four sides: each parent and each sibling. Yet, we taught her that we are a family and we work on our relationship. Sometimes she tried to be a friend and when that failed she came to realize that she is a daughter and a sister, and that even though she may not always feel treated that way she has to keep that in the forefront. By putting her relationship above her needs Lyn found that she had something better than a friend: a family who really cared for her.

In every relationship there needs to be clear, healthy boundaries. This tells the other person what is expected of them and how far they can go and what they can get away with. Sometimes my middle daughter Lyn had to make it clear to her siblings that she had her space and her place. In an attempt to create boundaries and establish her control Lyn often would not want to let her siblings borrow something.

While she needed to make it clear that it was her stuff she often put stipulations and tried to remind the others of the last time she asked to borrow something and how they acted. This is not always good in that we make the others feel bad. Lyn learned that it is ok just to says no or say yes, and have no stipulation. We all developed a healthy respect for one another and how to approach requests like borrowing. Boundaries need to be safe and healthy for all involved individuals.

It goes without saying that character is an end goal in life. Conflict often tests us and for the middle child it is no easy task to avoid conflict. Lyn learned through many tears, sorrow and joy that it is better to be the better person and say “in this moment I’m going to choose to love my parents or siblings and not respond or react.” Part of character building requires that sometimes we walk away in order to avoid a heated argument or worse. It requires grace, strength, and a lot of mercy to get to the place where you can just move past the place of allowing conflict to always be the answer. For the middle child avoiding conflict will certainly make you stronger, building character.

The Dark Side Of Avoiding Conflict In the Middle Child

Don’t Be The Doormat

The punching bag, the doormat, and the scapegoat are terms that we sometimes hear people say about a person and often, with the middle child, they either feel that way or have actually allowed themselves to be such a person. By avoiding conflict over and over the middle child may send a message that they says “go ahead and walk all over me.” Often the middle child feels overwhelmed from all of the people in the family and will not stand up for themselves. They grow weary and just say nothing, just to “keep the peace.” But, there is no peace because the middle child is not peace because they feel that everybody does what they want to.

The Need To Withdraw and Become Isolated

What I call the “trash can syndrome” can result if the middle child does not speak up and carry on conversation that is healthy and will avoid future conflicts. By trash can syndrome I mean that my daughter Lyn would get tired of dealing with the rivalries and constant conflict and run off to her room or just stay there all day. When me and my wife would talk about issues she faced, instead of talking about it she would end up in her room. A day of homeschooling often ended with her turning off her lamp and going to her room and putting her trash can by the door to keep everyone out. By avoiding conflict the middler can become isolated and withdrawn.

By avoiding conflict, the underlying problems are not dealt with and the situation grows worse. For Lyn all of these negative reasons for avoiding conflict proved to be a detriment and resulted in situations and relationships becoming almost non-existent. Being introverted was her nature, so it took us longer to see that Lyn was not just being introverted, but totally withdrawn, with no solutions found to the problems that caused this lifestyle.

The conclusion is that the middle child will have to weigh every situation and relationship and determine the best course to take to decide whether to avoid conflict or not.