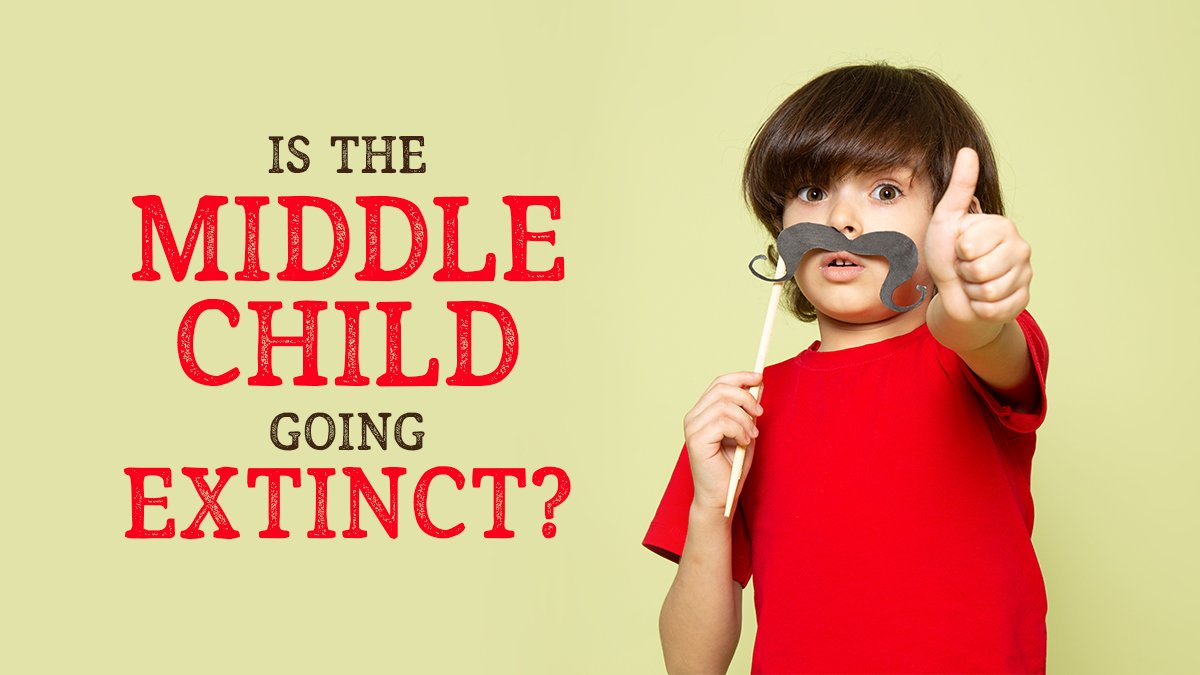 Is the Middle Child Going Extinct?

Middle children are known to be extremely resilient and self-motivated individuals who have gone on to achieve great things in life. Some have become heads of state while others trailblazed in their line of work. But the burning question remains: are they going the way of the dodo We have established that any child who isn’t the firstborn or youngest, immediately qualifies as a Middle. So it doesn’t matter if someone is the 4th child in a family of nine or third child in a family of four – they’re all Middles. So there is great hope for Middles since the criteria for being a middle child are pretty lax. But then comes the challenge – what if society at large decides to have fewer children, let’s say two or less? Now, that would be an existential crisis for Middles. Are Middle children going extinct due to changing social trends? For an accurate answer, we must first take a good hard look at the state of the world population.

The Human Population Circa 2020

It should not come as a surprise that Earth is overpopulated. In fact, it has been an issue since 2010. If this keeps up, we might run out of living space altogether. This is why there has been mounting pressure for galactic alternatives. Elon Musk’s Mars colonization plans and Blue Origins’ lunar expeditions are two hot topics. Overpopulation on Earth is a recurring trope in many works of fiction. The antagonist in Dan Brown’s award-winning Inferno was a bioterrorist who plotted to turn a quarter of the population infertile with the release of a waterborne chemical agent. But all doom and gloom aside, overpopulation has prompted some lifestyle changes, which may affect family size, and yes, the existence of Middles. It seems like more people are aware of the “big human issue” and becoming increasingly eco-friendly – which includes committing to sustainable societies (and smaller families). They’re devoting themselves purely to careers, innovations, and spiritual journeys of self-discovery. This also means that the average age of child-bearing is probably going to be extended since time and energy are expanded in self-pursuits. Technology also plays a major role – with the advent and development of IVF and other birth options that enable women to have children at virtually any age. In fact, according to one study, older women (above 40) are the only group that has seen a marked rise in conception rates. Although advanced technology enables women to beat the biological clock, it takes a lot of energy to raise children. These duties include chasing them around, feeding them, chastising them, clothing them, and keeping them away from bite-sized objects. Women may be having children later in life but the physical strain of caregiving may reduce the number of children they’re planning to have. And once again, lowering the probability of Middles coming into existence. However, there are factors that empower couples to continuously support larger families (of more than two children). as we shall see.

According to Pew Research Center, the average size of an American family in the 70s was much larger than those in modern times. According to Gallup research, child-raising costs differ vastly between rural and city dwellers. Families in rural areas in the US are likely to spend the least on a child. It is reported that child-rearing expenses were 27% lower in rural areas than the urban Northeast, primarily due to lower housing, child care, and education. This means that the locale of a family will also play a crucial role in determining family size. As such, large families are still likely to persist as long as citizens have the means of affording them. Child-raising has become more expensive over the years due to inflation and other economic changes. Some respondents from the Gallup surveys had also considered the state of the economy as a determinate factor. Thus, an improvement in the economy might see the rise in the overall number of children. And thus, improving the chances of Middles being born. In developed countries such as America and South Korea, birth rates have also declined due to the influx of women in the workforce. Childbirth is known to disrupt the career progression of female workers, which has been interpreted as a disadvantage compared to their male peers. As a result, many women reconsider motherhood in lieu of maintaining a competitive edge at the workplace. Proper family planning is key to having larger families, which remains highly achievable with proper care and support from employers. Governments around the world have also contributed toward rectifying the birth rate issue. Countries with declining birth rates offer attractive packages and services to encourage bigger families. In Singapore, citizens are provided with cash incentives that allay child-rearing fees, while Hungary is providing free IVF treatment as a bid to boost its population. The Hungarian government has also provided tax exemption for mothers of four or more children.

Although a paradigm shift is inevitable with changing social trends and mindsets, Middles are likely here to stay. Big families are symbolic of joy and blessing in many parts of the world. Societal support from employers and governments will continue to create the ideal environments for Middles where they can thrive and bring joy to everyone around them. So, the good news is that middle children aren’t going extinct anytime soon. The world will continue to enjoy the marvelous company of Middles who will grace society with their unbridled passion for leadership, fairness, and creativity.
(Visited 128 times, 1 visits today)
Share this