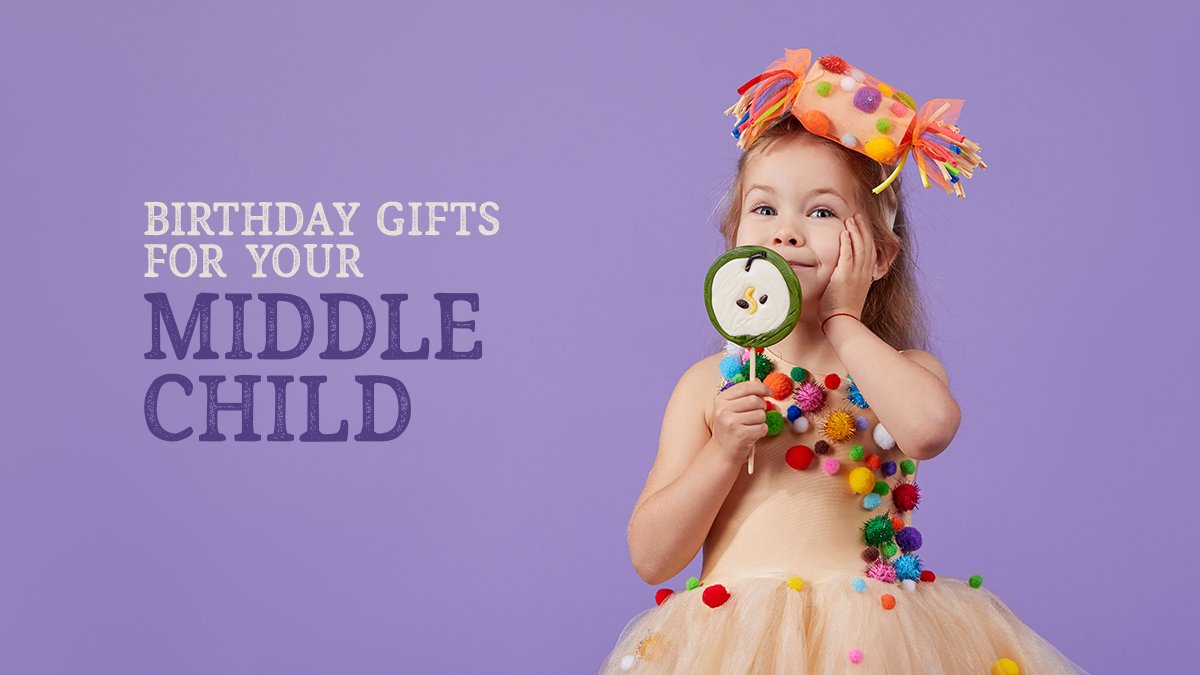 Birthday Gifts for Your Middle Child

Who doesn’t love a birthday party. Everybody deserves to be treated special on their big day. Children always anticipate what the day will bring and their expectations include surprise gifts from friends, family and especially mom and dad. To the middle child the big day can be quite distressing. With all of the normal expectations, there is also the usual competitiveness between siblings. The questions begin with, “will my bicycle be as nice as my older sibling”? What will mommy and daddy get me? Remember when mawmaw got me an outfit that I thought wasn’t as nice as big sisters? Uh! The thoughts rage on and on until at last everybody is gathered, including both of the sisters.

Getting What The Others Get

It only takes one unkind remark to ruin a birthday party but what is worse is when it comes from the older sister reminding the middle child that her barbie had 4 outfits, and my ken had a beard, or any number of statements pointing out that “my gifts were better because they were mine”. It is bad enough that my middle child noticed what was different and has to point it out. But to hear it from her sibling is like pouring salt into the wound.

Sometimes the middle child brings it on and makes it something that it shouldn’t be . Sometimes children perceives things to be one way when in reality it’s not that way at all. We had bought the same doll with the same house and other features as we did for Lizzie but somehow Lyn didn’t see it that way. She saw everything that was different when all that was different was probably the price. She had ingrained it in her mind that it wasn’t going to be the same. There was no making it right except to point out something that was not different as being different. Lyn always asked for something that Lizzie had received the year before, and also something unique.

Most children usually get clothes at Christmas and because Lyn’s birthday is in January we always gave her some sort of winter outfit or coat. One year she requested that we not give her any clothes because she didn’t want any of her big sisters hand me downs and she didn’t want them to go to her baby sister. She knew that we still bought her nice new clothes on special occasions. tI was another twist in the birthday gifts for my middle child drama.

I asked myself when Lyn’s birthday approached, “how can we get through this without any major incidents”? Of course I made it worse when I suggested that we just not give her hand me downs and not give her any clothes. Just toys and dolls. My sarcasm seems to come at the wrong time. Then there was the year that Lyn had been helping me do some light remodeling around the house and she requested a ‘tool belt’ for her birthday with some tools! Yikes, where did that come from? In an effort to break away from the usual and mundane and to just be different she decided that she wanted a set of tools like her father, and that was what we got her.

Getting What They Want

The middle child is no different in desiring an enjoyable birthday full of surprises and fun. They also want to receive gifts that they have asked for, and they want them to be something that speaks who they are when they see it. They don’t want to be reminded that they are not the oldest or the baby. Lyn received tools from her friends and later she started liking books. She went through phases and fads and received many wonderful gifts. The fondest memories I have is the occasion where Lyn received everything she wanted and then someone brought her some jewelry. It was as if you just slapped her in the face. Not that she hated jewelry but she was one of those that didn’t want anything that reminded her that her sisters like jewelry.

My middle child is one that wants exactly what she asks for, as a birthday present. Any deviation is as if you are saying, hey we think that this is better, or worse we didn’t hear you so we thought we would just do it this way. Whatever the perception we learned we had better do it exactly as requested. It was after all her birthday gift and not ours. It wasn’t supposed to be what we thought or remind her of sibling rivalries.

Birthday dolls were an important part of the celebration for all of my children. The grandmothers took turns as to who bought which birthday doll for which child. Lyn didn’t like the fact that the same grandmother purchased her birthday doll. As with everything else she accepted it and moved on. That was not always the case when she didn’t get what she wanted. One year I couldn’t find a certain classic novel for Christmas and so I promised I would have it for her birthday, just weeks away. When the day of celebration arrived and I still did not have that novel you would have thought that I had just given her news of her pet dying. I eventually purchased it but it was just not the same. Sometimes we as parents disappoint but we know how to make it up.

Middle children have many patterns that are common, and then there are characteristics not common to a middle child. The individual is after all not just a middle child but a person. Whether they get what they want, need or not for their birthday, they rebound. Often birthdays are the place where the middle child finds what they really like. Often the best gift is just having that small celebration with the family and one special friend at the ice skating rink. We only disappoint when we fail to remember that they are the child that prefers classic novels and they can read Tolstoy’s War and Peace , all 1200 pages, in less than a week after receiving it. That is what birthday gifts for a middle child are all about. Something that the oldest or youngest would never want for their birthday and they could never perform such a feat.