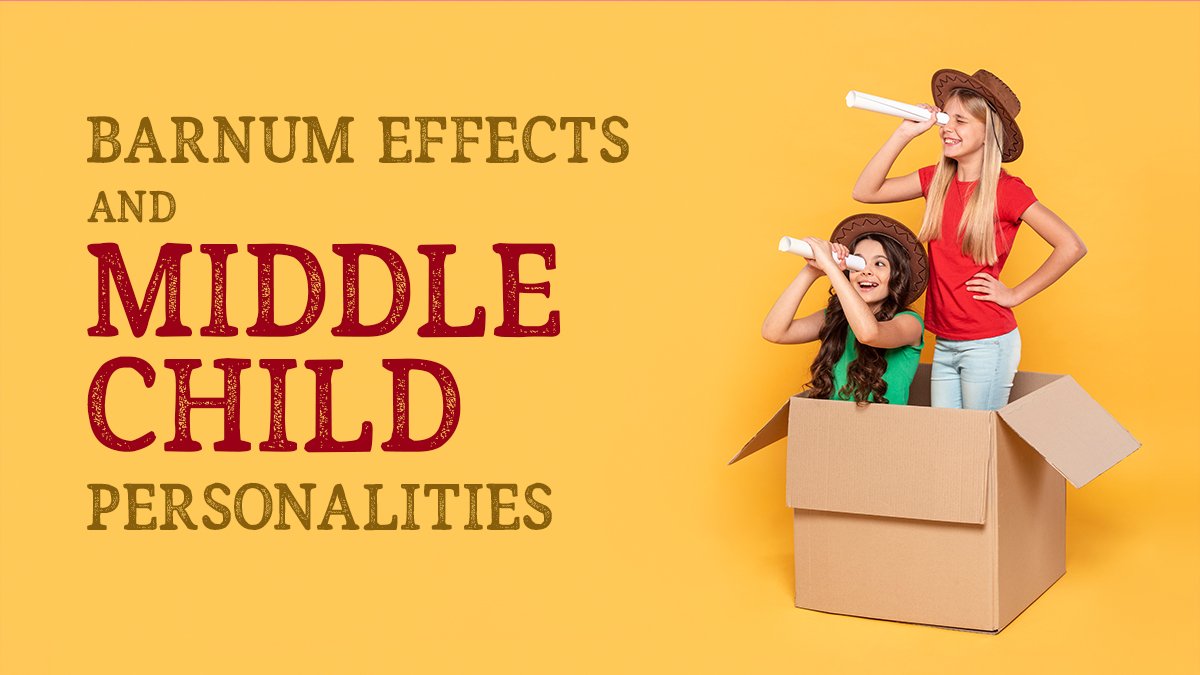 P.T. Barnum was one of the greatest showmen to have ever lived. He brought joy, thrill, and amazement to thousands of paying customers through exotic shows and stunning exhibits. Unfortunately, the wily entrepreneur is best remembered for being a skillful con artist. Thus, in modern times when we refer to something as having the “Barnum effect”, it is likely to contain the elements of mischief and trickery. The Barnum effect is a “fake it until you make it” concept, which is well-known for its ambiguity. The horoscope is one prime example of Barnum effect in full swing. True to Barnam fashion, horoscope columns (regardless of star sign) seem to describe the reader with spooky accuracy.

The stereotypes of middle child personalities are yet another manifestation of the Barnum illusion. In truth, a child’s overall development is dependent on myriad factors aside from birth order. Although there is a chance that middle children may develop some of the personalities typically ascribed to them, it is never a certainty. Parents and guardians should not leave middle children to their devices simply because they’re fated to develop said personalities.

To avoid the Barnum fallacy, we’ll explore some popular middle child personalities and suggest how parents and guardians can help shape expected personalities into a reality.

Middle children are believed to be extremely easy-going since they’re always required to play nice with their younger and older siblings. This idea is coupled with the belief that they’re less stubborn and willful compared to the entitled firstborn and dependent youngest child. However, such a personality is only made possible if parents and guardians promote a home environment of sharing and caring. When fairness is poorly managed, middle children may feel left out and turn jealous or defensive against siblings – leading to the opposite result.

It is important to ensure that every child is given equal rights and benefits to prevent contentious behavior among siblings.

It is believed that middle children are natural conversationalists who are capable of building instant rapport with all and sundry. There is perhaps some truth to this since they’re constantly required to impress parents while appeasing siblings (and avoid being ganged upon).

However, this is largely dependent on their immediate social environment and the behavior of siblings. For example, if the eldest and youngest are known to get what they want by whining and crying, chances are, they’ll follow suit. Parents and guardians shouldn’t expect the middle child to be obedient and charismatic if the siblings are being rewarded for bad behavior.

Parents and guardians can improve the conversational skills of their children by leading by example, that the best form of communication is conducted meaningfully and with respect. Children are known to learn by modeling the behavior of adults. Studies have shown that such imitation of behavior leads to long-term effects on the personalities of children.

Middles are known to be the calm and sensible ones among their siblings. They’re dependable to the point that parents and guardians may entrust them as an extra pair of eyes during their absence. This personality depends on how the middle child is responded to during the developmental years.

For example, if the middle child faces constant rejection or is frequently ignored, the individual may accumulate pent-up aggression and sadness. This may ultimately lead to sudden outbursts of rage and violence or a chronic lack of emotional constraint.

Parents can remedy or prevent this by ensuring a policy of transparency when interacting with their children. This means that children are encouraged to speak the truth regardless of the situation. Such practices will help strengthen the self-esteem and self-confidence of your child and ensure that they’re able to stay level-headed free from emotional burden.

Middle children may be perceived as being generally friendlier than their siblings since they’re constantly in need of winning favors. This is usually an inaccurate portrayal of middle children. The middle child isn’t obliged to seek validation at all times. Some individuals may grow weary of the pandering process and shrug off the need for company. This could lead to solitary behavior and social problems in the long-run.

Parents and guardians can prevent this and bring out the best in their children by establishing a loving home where siblings can live, work and, play with each other.

Independence is a double-edged trait. Due to a lack of attention, some middle children may gradually seek relations from outside the family. Relations could come in the form of friends or mentor figures from school. These individuals give middle children their time of day and are generally perceived to be more understanding than parents, guardians or siblings.

Middle children are likely to discover their inner selves much sooner than their siblings. As such, they are motivated to freely explore and make sense of the world, guided by a personal set of rules.

However, parents and guardians should take note of the serious risks that come with premature independence. Younger children may fall prey to some bad company who lead them down self-destructive paths – and parents will be none the wiser due to disrupted communications.

It is important for parents and guardians to strike a chord with their children. As far as possible, external relations should never be a solution for familial neglect. Parents and guardians must ensure that adequate care is provided to every child to let them know they’re loved and appreciated.

Independence should be a gradual process, where a child is taught the consequences of cause and effect. A famous superhero movie quote goes, “with great power comes great responsibility.” This is indefinitely true and children must learn to safeguard themselves before taking a brave leap into the big blue world.

Middle children are known to have a strong sense of self-motivation, which may stem from the will for self-preservation. They understand the meaning of hard work and the necessity of staying focused toward achieving a goal. This may be due to a lack of support from parents or guardians during their foundation years. The common belief that pops up in their heads goes, “if I’m not going to help myself, who will?”

As a result, middles are forced to grasp at straws from a young age, which develops into a lifelong passion for self-motivation.

However, self-motivation is largely dependent on the will-power and endurance of a person.

Undeniably, it is easier for a child to surrender when the cards are stacked against them.This means there is an equal chance for middle children to give up easily in the face of adversity. Parents should not depend on the luck of the draw (in seeing how a child responds to an unsupportive environment) – a child’s future is never a gamble.

Instead, caregivers should provide constructive feedback and positive reinforcement as often as they can. This will help children become better assured of their thoughts, actions, and decisions. Over time, your middle child will become more confident, determined, and self-motivated to bring positive change to the lives of those around them.

Success is the most ambitious entry on our list. Middle children are known for being wildly successful, usually exemplified by dropping big names like Bill Gates and Warren Buffet.

However, success itself is subjective and may be defined in various ways. An athlete and investor are both successful in their own right. Also, success is a sum of life experiences, which vary among families.

Perhaps, middle children are tied to success due to the combination of positive personality traits listed above. These traits however are unlikely to occur by nature. Additionally, there are other significant factors that steer the upbringing of a middle child. These major factors include the gender of siblings (i.e. the only female child in a family of boys might receive greater attention regardless of birth order), living conditions, divorced/separated parents, and education.

While it is easy (and slightly hopeful) to subscribe to the Barnum way of things, Rome wasn’t built overnight. Middle children aren’t destined to live out the amazing personalities attributed to them without proper guidance. As alluded in the opening paragraphs, the Barnum effect is also a proposition to “fake it to make it.”

Each child is unique, provided with the opportunity to succeed through the patience, dedication, and, support offered by parents and guardians. And in good old-fashioned irony, it was Barnum who famously quipped, “no one ever made a difference by being like everyone else.”