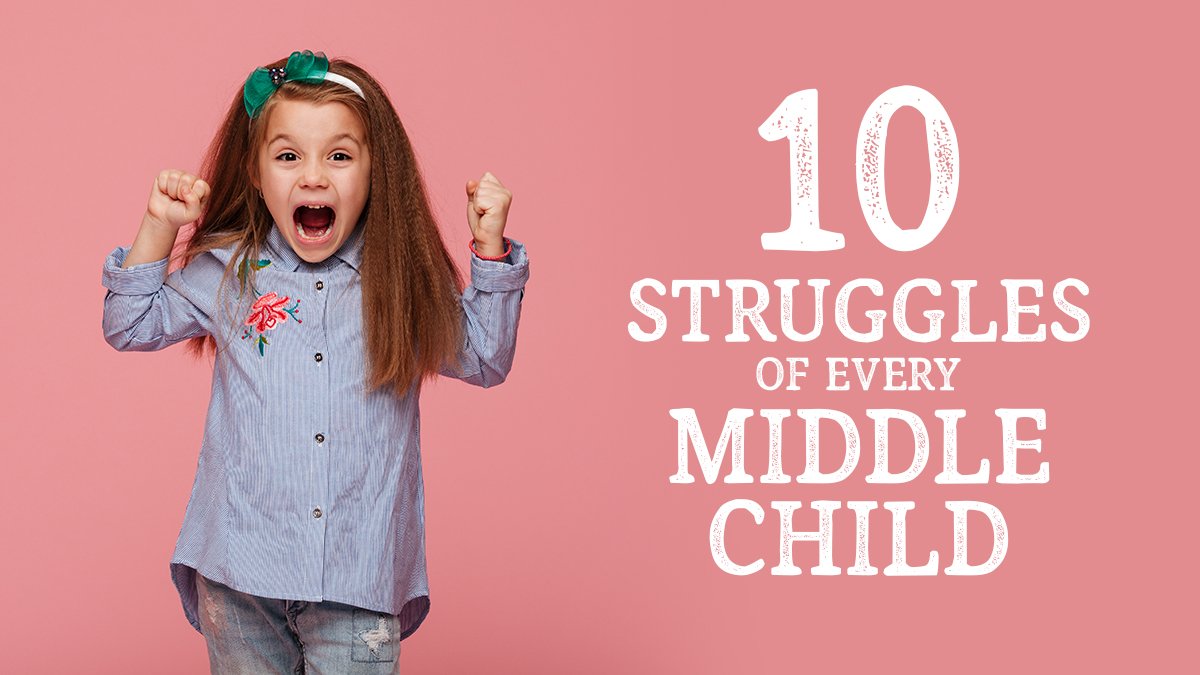 10 Struggles of Every Middle Child

Learning to face and handle areas that we struggle with is a normal part of life. Individuals and families walk through situations in life that attempt to keep them down and hold them back. The term ‘struggle’, according to the Oxford dictionary, ‘ is a forceful or violent event to get free of restraint, or resist attack.’ The middle child has areas in which they ‘struggle’ with, and must find ways to ‘break free’ from whatever attempts to hold them down.

Based on my experience, we will look at ten areas where middle children struggle. In this writing we will delve deeper into some topics that I have previously discussed. Sibling rivalry or competition tend to produce responses like fear, anxiety, depression, rejection, and hopelessness. Yet, the beautiful part is that every middle child already has what they need within them to overcome the struggles we are examining here.

Being Confident In Themselves

We all need a little confidence booster from time to time. Losing confidence in oneself is common and is only a concern when we allow that lack of confidence to keep us from accomplishing what we need to do. The number one struggle that my daughter Lyn has is a lack of self-confidence. When she was a toddler and she wanted to do things for herself she would say, “Me do it!” Certainly she was confident that she could do what she saw me doing.

As she grew older, and we expected her to make more personal decisions, it seemed that she was always coming and asking, “What should I do?” or ‘should I do this or that?’ We always walked her through the scenarios and possible choices in an effort to help her come to a rational decision. The goal or every child is to grow and be responsible, and to make healthy choices, so that they can look confidently and know that they did their best. It seems that Lyn can still struggle with confidence. Part of her ability to become more self-confident has come from the people that indirectly made her lose confidence: her family members. We have always encouraged her, and even when she has made a bad decision, we tell her to learn from it and move on. We tell her often that ‘we believe in you.’

Measuring Up To Parental Expectations

If you were to ask my middle daughter what her top struggles are, she would tell you trying to measure up to what her parents expected of her would rank near the top. I am not talking about the things we teach all of our children to do like doing good, being honest, treating others with respect and the like. My middle daughter, Lyn, had developed certain expectations that she believed we placed on her. It was a performance driven expectation and she boxed herself into a mindset that she ultimately would never measure up to what we expected, whether it was real or perceived.

Her expectation was that I might want her to become a Taekwondo instructor or score a perfect score on the SAT. While those are noble gestures, my goal was always for her to do her best at whatever she did, and to not give up and quit. There was already enough pressure, and I never wanted my children to do something that they didn’t want to do. I always encouraged Lyn to strive for excellence and put her whole heart into it, and that was all I could ask. We as parents have to continually remind our middle children of exactly what we expect so that they are not allowing false expectations to rule the day.

Measuring Up To Siblings

Since middle children have a lot of sibling rivalry and competition it goes without saying that they struggle with those relationships, and ultimately feel trapped to measure up to their siblings. The older sibling is the trailblazer, and the middle child comes behind and feels they must walk the same path. If my daughter Lizzie accomplished certain grades or did certain things by age sixteen then Lyn believed in order to ‘measure up’ she had to do the same, or better. This becomes performance driven, and soon she sets her goals at beating out as her sisters, including baby sister Suzie.

Ultimately, Lyn discovered that she can never measure up, and she set’s her own marks and goals, which are actually achievable for her. Through trial and error, she learned that she didn’t need to compare, compete or perform. It seems that this can carry over into adulthood and it is an ongoing battle, but Lyn must remind herself that she has her own life to live, and that is what brings peace and joy.

To say that a middle child struggles with rejection is really an understatement, but Lyn dealt with this not only in family and non family relationships, but also she blamed God for ‘everyone looking over me and rejecting me. Rejection is real and should never be taken lightly, and can lead to a lifetime of alienation, depression and anxiety. Continuous affirmation, not only of our love to Lyn, but that God loves her and has not rejected her is what helped Lyn overcome rejection. Demonstrating that she has not been ‘rejected’ by accepting her and always including her in decisions about little things like “What is for supper?” or “What movie would you like to watch?” go a long way in saying your opinion is important and we value you.

Taking On A False Identity

Closely related to rejection is the fact that the middle child can take on a false identity. This is tied to the fact that the middle child assumes the identity of one of the other siblings in an effort to find her own identity. Constant reminders to Lyn made her aware that she is not Lizzie or Suzie, but rather she is Lyn, who happens to be my middle daughter, and that she has her own path in life. As my daughters grew older and stepped into their life paths, Lyn found her own unique identity, and oftentimes, as doors of opportunity open up we find ourselves awestruck at her achievements.

Relationships Outside Of The Family

Everyone desires to be successful in everything that they undertake. Many middle children have been presidents and great leaders. Still, they endured many of the same struggles and challenges that I have outlined. For Lyn it was often clouded by trying to measure up or find out who she was. But we taught her that success is measured not by how much stuff you have or by how may certificates and degrees you have earned, but by whether you finished what you started. It seems that Lyn was always beginning a new hobby only to lay it down after a little while. She felt overlooked and moved on to something else. Now her goals are set and she doesn’t quit until it is finished. That’s success.

Part of building relationships is accepting others and being accepted as well. Every middle child will struggle from to time with being accepted, especially in the familial relationships. So many times I remember my daughters Lizzie and Suzie being upset at the way Lyn did things. They really had a hard time accepting her uniqueness, despite the rivalries and competition. At the same time, my wife and I failed when it came to accepting Lyn for who she is. Once we as family members accepted the peculiarities that make up Lyn, it made it easier for her to work on other relationships and eventually people accepted her as Lyn, not Lizzie’s sister or my daughter.

When it comes to struggles, wandering about what the future holds for the middle child can conjure of hopelessness and defeat. If Lyn focused only on what she saw around her, and never looked outside of her family or her situations, and instead peered into the limitless possibilities, she would have continued to struggle, never finding what she was created to do. Doubt and fear have plagued many middle children for various reasons, but those famous middle children who went on to do great exploits never gave up. That was the phrase that Lyn had placed on one of her black belts: “Never give in”, adapted from Sir Winston Churchill’s famous speech. Nevertheless, it seemed for quite some time Lyn struggled to see any good in her future. Fortunately, she has never given up and her future is bright.

While these areas of struggle may overlap, and we should be aware that every individual can struggle in these areas, the middle child will certainly experience them to a greater degree. And yet, when they break free, the world will have to be ready for the change coming from a middle child who has overcome.