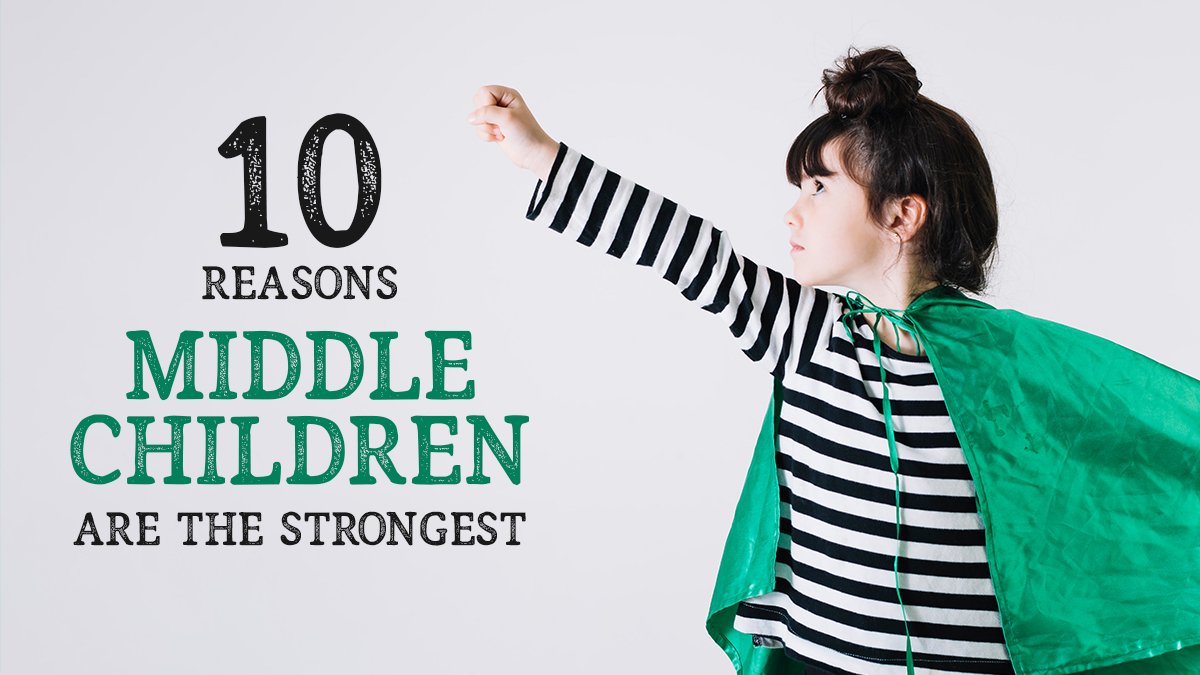 10 Reasons Why Middle Children Are The Strongest

Middle children may perceive themselves as the forgettable and unspectacular one among siblings. This phenomenon has been coined as Middle Child Syndrome. But the order of birth should not affect a child’s chances of success in life. Parents and guardians can do a great deal to negate or avoid the perception altogether. On the contrary, middle children may actually be the strongest due to their position, in their pursuits for a fairer world.

A Flair for Diplomacy

The middle child is the pivotal bridge between the entitled firstborn and the pampered baby of the house. As such, middle children learn to master the art of diplomacy from a tender age. They may be emotionally mature compared to their siblings. Instead of fending for personal interests, they’re looking for the best method to resolve a dispute, which benefits everyone.

Parents and guardians may ultimately depend on the middle child as an enforcer – or a prefect of sorts – to help them keep control around the house.

Conflict management remains a major soft skill in most organizations and middle children are born to excel in it.

Competition is a recurring theme in the life of the middle child. They’re constantly striving to amount to something great and stand out from the crowd. Questions such as “Am I good enough?”, “Am I invited?”, and “Am I a part of the group?” are constantly driving middle children to prove themselves.

This usually originates from the childhood desire for attention, especially from parents and guardians who play favorites within the household. Their competitive natures eventually develops into the conviction of achieving their goals no matter the challenge.

As such, middle children are motivated to succeed and are less likely to give up on their objectives.

Middle children employ an empathetic approach to society. They might be painfully aware of the difficulties and sensations of being shortchanged or overlooked.

A strong sense of empathy enables them to connect with others in intimate ways that foster lasting and meaningful relationships. They’re also excellent listeners who are ever-ready to give others a chance to voice their opinions.

A strong sense of empathy provides them with greater emotional control, enabling a firm hold over their thoughts and actions to determine the best solutions.

The middle child may seek alternate ways of impressing their parents and guardians. This process hones their innate creativity. As such, they have the lifelong practice of thinking out of the box and beyond immediately available resources. Their creative expression may also manifest in interests and hobbies. For example, middle children may be inclined toward the arts while siblings are competing over sporting achievements.

Middle children thrive at adapting to situations while strategizing the best outcomes. They’re always weighing the pros and cons of a decision based on environmental limitations.

This stems from the need of pleasing siblings at times while standing up to them under other circumstances. Middle children are able to quickly adapt to unfamiliar territories and are mentally prepared to cope with sudden changes in their lives.

Creativity and adaptability may only succeed through great resourcefulness. The middle child is an avid learner and observer who seeks to override the negative thoughts of Middle Child Syndrome. They focus on accumulating an arsenal of “shortcuts”, life hacks, and social connections to help them through any crisis.

Middle children are expert communicators who tend to use the right words at the right time. They’re accustomed to mediating arguments between siblings and winning the support of parents and guardians. They score high in the likeability meter, giving them a significant advantage in social situations. Middle children are likely to succeed in leadership roles for their strong connection with people through catering to their needs.

Younger siblings may find themselves overly dependent on others while elder ones demand help. However, middle children are comfortable figuring things out on their own. They become independent by learning from the hits-and-misses of older siblings and mentoring the younger ones. Their independence creates a greater awareness of their strengths, desires, and goals, which gives them a headstart in their adult lives.

Words and promises are especially precious to middle children. They value the validation, love, and acceptance from parents, guardians, and their siblings. As such, they’re likely to develop into trustworthy and dependable adults.

Their ability of gaining trust leads to great success in their professional and personal circles. Trustworthiness is essentially the courage to do the right thing, even when defiance seems more appealing. Middle children will be able to assume important roles in society and open many doors of opportunity with a trustworthy reputation.

There is great strength behind humility. Middle children understand the downside of over-expectation. They’re grounded and unconstrained by pride, which provides them with a growth mindset for continuous improvement. This also prevents the effects of complacency and stagnation, which limit progression.

These ten character traits make up the strength of the middle child. Historian Warren Susman once touted that character is an essential component of one’s identity. Indeed, character defines the amplitudes of a person and the way they handle the curve balls swung toward their direction.

Middle children can keep families together during tough times, serving as the beacon of diplomacy, and resourcefulness.

However, it is necessary for parents and guardians to realize the importance of their roles in the development of their children. Middle children may find themselves underappreciated during early childhood, which places a serious strain on their self-confidence. Parents and guardians should provide a conducive growth environment where midde children are provided with adequate care, concern, and support to help them reach their fullest potentials.